Retreat to this hidden gem while exploring the festival city of Edinburgh.

The capital of Scotland offers visitors a memorable way to start exploring: Following the popular Royal Mile. From Edinburgh Castle to Holyrood Palace (and everything in between), there’s plenty of medieval history in the old town to be learned and enjoyed.

Taking the North Bridge to Princes Street leads to the city’s new town, where neoclassical Georgian architecture abounds among the residential streets and the commercial districts.

The recently renovated Nira Caledonia has 28 rooms, spread between two three-story Georgian townhomes. As a member of Small Luxury Hotels, this boutique abode offers a relaxing retreat from the lures of Edinburgh’s old town historic sites and the new town’s museums and restaurants.

It’s a 10-minute walk up the hill to Princes Street, where several boutiques tempt with Scottish souvenirs, as well as the Scottish National Gallery and the Scott Memorial. Walk down the hill and in less than two minutes discover the charming neighborhood of Stockbridge, with several cafes, shops and welcoming places for a pint or a whisky. The Water of Leith pathway cuts through here for those who like to roam while the Botanical Gardens are close by for a place to stop and smell the roses.

WHO HANGS HERE? IS THIS HOTEL FOR YOU?

Couples will appreciate being close to all the lively options of Edinburgh’s thriving arts and culture scene, but also appreciate being just far enough away in a residential neighborhood without having to worry about the sights and sounds of late-night revelry. Solo travelers can also happily arrive here at any hour, and know the staff will welcome you by name. 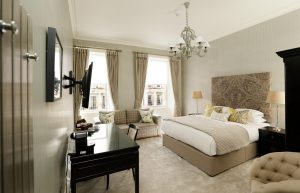 Each room features a different layout, size and décor. As both buildings are Grade A listed buildings, (historic structures), there are limits on renovation, so you should know that there are no elevators. In building number six, the main floor is a hint to room décor, focusing on pale shades of blue, yellow and cream and soft lighting, while building number 10 is darker tones such as navy, red and black with more dramatic lighting.

Standard room amenities include a king bed, dressed in crisp linens, Scottish wool throws and patterned accent pillows in jewel tones of saffron, indigo, black or emerald velvet or satin. Oversized fabric-covered headboards are de rigeur, wallpaper is used in many rooms, and oversized photography adorns the walls, while the thick carpet underneath encourages walking around in bare feet (although complimentary slippers are found in the room’s wardrobe).

Larger rooms feature sitting areas and desks, and can include a love seat which converts into a double bed. All rooms have a flat screen TV, complimentary Wi-Fi, a stereo docking station/speaker and complimentary Nespresso coffee, tea and Walker biscuits plus a selection of British lifestyle magazines. 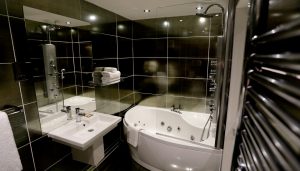 Bathrooms feature oversized gray metallic tiles and mirror tiles, a jetted tub/rain head shower, L’Occitane bath amenities, thick towels and bath robes. A few suites also include Jacuzzis and a couple of suites located the lower level offer a walkout to a patio with an outdoor seating area in a small garden.

With a discreet entrance on Gloucester Place, the red carpet is the only giveaway that this is a hotel entrance. The reception is simple, with a banquette on one side for arriving or departing guests to rest and a small desk opposite for hotel staff. A winding staircase with a black wrought iron banister leads to the rooms on the three stories, with black and white photography on the walls showcasing notable Scottish locals like Sir Sean Connery.

There may be no fitness center, spa or multitude of public spaces, but the congenial comfort of the rooms makes this boutique hotel a perfect respite from a day out and about. 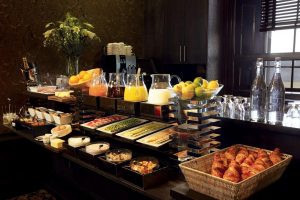 The main floor in number six include Blackwood’s Bar & Grill, named for the city’s Blackwood’s Magazine,which had been written by former resident, 19th-century essayist Christopher North (pseudonym for writer John Wilson). Decorated in blue floral wallpaper and tufted high-backed chairs, the space can be used during the day as a work space.

Each morning, complimentary breakfast is on offer, a buffet of fruit juices, yogurt, cereals, pastries, bread, cheese and deli meats. A menu also offers hot options such as scrambled eggs with Scottish salmon or that other Scottish morning mainstay, porridge.

At lunch or in the evening, you can enjoy a glass of home-grown beer, gin or single malt whisky at the bar and indulge in a menu reflecting locally-sourced ingredients and products; the hotel also patronizes several food purveyors found in nearby Stockbridge. Standouts from the menu include Scottish seafood and lamb, both of which can be had served hot off the restaurant’s charcoal grill.

The hospitable staff were always wanting to make sure they could aid in some way, whether it was a pot of tea or advice for where to explore in Edinburgh. And the room’s décor—from the textiles to the art—made one feel like they had found their new lair in Edinburgh. It’s no surprise the hotel was awarded City Hotel of the Year in 2015.

As someone who appreciates being able to make tea in my room, the high-quality tea bags and lovely cups were a plus; for guests like me, a tea pot would make it perfect, as well as an easier spot to plug in the kettle so it doesn’t have to be on the floor.

A petite double, single or double occupancy, starts from £155(US$200) per night.

(Waheeda was a guest of the hotel during her stay. The hotel had no editorial input for this review.)